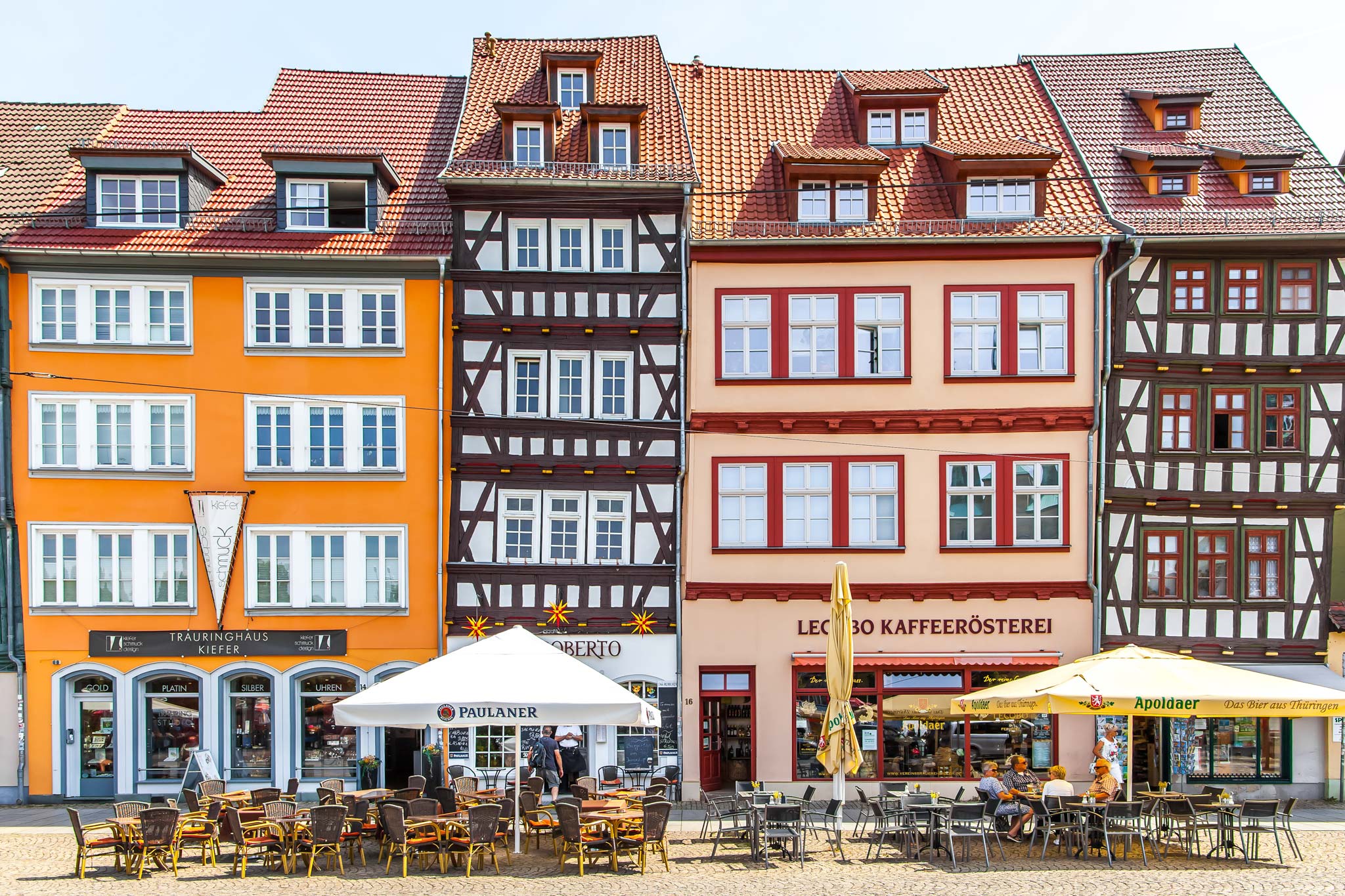 SSIGNMENT WITH THE CULTURAL HEART OF GERMANY

If you want to star in your own fairytale then you need to head to Erfurt, the capital city of the Thuringia region. Medieval bridges, captivating cathedrals and colourful squares merge to create one of the cutest hidden gems in Europe I’ve ever visited.

But the region of Thuringia, an area I’ll admit I had never heard of until earlier this year, deserves more of your time than just a flying city visit to Erfurt. Combining visits to nearby Weimar and Gotha make for the perfect week vacation, especially for those who appreciate classical culture and the arts as this region, part of the cultural heart of Germany, is exploding with both.

My journey didn’t start in Erfurt, but being the place that captured my heart the most during my trip to Germany, it’s the base I think you should use as a temporary home to explore the region.

The city of Erfurt is the largest in the region, but with a population just north of 200,000 it certainly doesn’t feel hectic or crowded like many city breaks. It may not have the edge of Berlin or the status of Frankfurt but it oozes charm and sophistication and the old-town has enough to keep you entertained for days.

Dating back to around 700 AD, the city slowly built up as an important trading destination in the Middle Ages and thanks to the old town surviving WWII you can still experience it very much as it once was. Home to Germany’s oldest university, the city has a young vibe and in the summer months when I visited beer-gardens were overflowing, and every street felt alive.

The city has a real mix of architecture to discover, and with Central Europe’s oldest surviving synagogue, which now plays home to the Erfurt Treasure and historical Hebrew manuscripts, it’s chasing for UNESCO World Heritage status due to its Jewish Heritage.

But while this is a city with countless attractions easily explored on foot, it’s also a city you can happily get lost in; slowly kicking about from beer gardens to bratwurst venues on the cobbled streets while taking way too many photos of the colourful, wooden beamed facades.

It’s rare I feel like I’m on ‘vacation’ when I’m on a photography assignment but in Erfurt I really did thanks to the laid-back vibes and excellent ice cream (don’t miss a scoop of chocolate from Eiskrämer on the Merchants bridge).

The Merchants Bridge is one of the most famous tourist attractions in the city and for a good reason. The medieval bridge is lined with timber built shops and houses and is one of the few bridges in the world that still has inhabitants living on it. A walk up St. Edgidius tower, the church at the foot of the bridge will provide incredible views of the city and the stone street running through the centre of the bridge.

While walking along the bridge is pretty as a postcard, some of the best views are from the gardens at the rear where on a sunny evening locals crowd around the waters with bottles of beer to enjoy the history and atmosphere of this relaxed city.

The architecture tour continues through the main churches and cathedrals within the city. In the main square, Erfurt Cathedral towers over everything and inside the gothic cathedral the giant ceilings and beautiful stain glassed windows are breathtaking.

A short stroll from here will take you to Petersberg Hill and Citadel, which looks down across the city from its prime vantage point. Constructed in 1665 the citadel has over two kilometres of stone walls and you can even walk through the hollowed out tunnels that were used to fire weapons and protect the city. The maze of underground tunnels aren’t all open to the public and restoration work continues at some of the buildings inside the citadel.

Another of the many attractions to note is the Augustinian Monastery, and those who are clued up on their Reformation history will know that part of Martin Luther’s journey began here as a novice monk. With so many churches and towers dotted throughout the city, you don’t need to visit them all, but this Monastery is undoubtedly one worth visiting before taking a stroll down one of the cutest streets in the city, the Kirchgasse.

The rest of your time can be spent sipping on local brews in the square, enjoying the ‘best’ Bratwurst in Germany (Thuringians take their sausages very seriously!) or trying local specialities such as Thüringer Klöße, a potato dumpling that is made from a mix of raw and cooked potatoes and with various stuffings. Oh, did I mention the ice cream… seriously, turns out some of the best I have ever had was in this city and trust me and my new sized jeans when I say, I know gelato well!

After you’ve got your fill of relaxing in this charming city, it’s time to take the train and head on some day trips to soak up more of the cultural heart of Germany. Next stop, Gotha.

I actually spent the night staying in Gotha, and while there is a handful of accommodation available in this sleepy city, I personally feel taking a day trip from Erfurt might be the best way to explore Gotha.

For a relatively unassuming city, there is plenty of history to unearth in Gotha. Once the residence of the dukes of Saxe, Goth and Altenburg and later Saxe-Coburg and Gotha, the main castle here, Friedenstein, is the earliest baroque complex in the country.

Visiting Gotha was a bit of a history lesson for me as a Brit given there are a fair few links to our royal family that I wasn’t aware of, turns out that royal bleed has crossed a fair few country lines!

King George V founded the House of Windsor at the same time he changed the name of the British Royal Family from the Germany Sax-Coburg and Gotha to Windsor, which I think highlights just how linked this small German city is.

Inside the castle complex with its many rooms of intricate art and architecture, you’ll also find Ekhof theatre, the oldest surviving Baroque theatre in the world. I spent hours blissfully walking through the heavily decorated rooms that are open to the public and was seriously surprised at how grand they are given from the outside the castle isn’t as large as others.

Opposite from the castle is the Ducal Museum, built by the royals to house an extensive collection of art for the public to enjoy and the large collection of Egyptian mummies, artefacts, sculptures and art is still on display here.

It’s not all ticking off tourist attractions though as the main market square, dominated by the bright red town hall, is home to a handful of bustling bars and cafes and on that warm July day the terraces were packed with people enjoying the slower pace of life found in this little hidden gem.

My second side-trip from Erfurt was to Weimar, a city that surprised me both on its scale and offering.

Having wanted to visit the most beautiful library here since I wrote about the best libraries worth travelling for, it was a real delight to step inside the Dubcess Anna Amalia Library which is small but oh so perfectly formed.

Sadly a fire wiped out much of the library and its collection, but with many of the books lovingly restored and the rooms reconstructed, it now houses over a million books, manuscripts, maps, musical scripts and other important historical and cultural collections.

On the city limits, accessible by bus/walking or a slightly out of breath bicycle ride is Belvedere Castle, a grand and colourful Baroque building and grounds dating back to the 1700’s and which now plays host to a museum and part of Weimar’s music university. The grounds are full of well cared for outhouses, gardens and an orangery and you could easily spend a few hours enjoying the exhibits and external spaces before shooting back down the hill on your bicycle in record time.

The city is crammed with art and architecture, and given the size, it’s impressive that it has two UNESCO world cultural heritage complexes, one for the classic side of the city and another for the Bauhaus.

Bauhaus University, for those not in the design world, is truly world-famous for it’s simplistic yet powerful design principles and as the home of Bauhaus before additional universities opened, the city is very proud of it’s contribution to contemporary design. So much so, the Bauhaus Museum will open next year to celebrate the centenary and further put Weimar on the map.

Walking through the streets of Weimar is similar to Erfurt, cobbled and stone alleys link up colourful squares and old buildings with bright facades while squares play host to multiple restaurants and bars and, more importantly, plenty of ice cream shops.

The city is also awash with parks and green spaces where many people were enjoying picnics among cute historic cottages and even a statue of Shakespeare.

Exploring Thuringia was as much relaxing as educational for me, being part of East Germany and the old GDR I re-learnt a lot of history here and later on in the Saxony region. While the cultural heart of Germany might be famed for its classical paintings, rich artistic history and undoubtedly impressive architecture, it’s also an ideal place to get to know the country a bit better in some of the most charming cities and towns it has to offer.

And even if you don’t decide to venture off and explore the whole region, do yourself a favour and make sure Erfurt is firmly on your list when you do visit Germany, it really is a fantastic hidden gem you should get to enjoy.